A nationally recognized expert in civil rights, Elise C. Boddie is a Professor of Law, Henry Rutgers University Professor, and Judge Robert L. Carter Scholar.   Boddie teaches constitutional law, civil rights, and state and local government law.  Before joining the Rutgers faculty, she was the director of litigation for the NAACP Legal Defense & Educational Fund, Inc. (LDF).  She supervised LDF’s nationwide litigation program, including its advocacy in several major U.S. Supreme Court and federal appellate cases involving voting rights, affirmative action, and fair housing.  From 1999-2005, she litigated affirmative action, employment, economic justice, and school desegregation cases in federal district courts and in federal courts of appeals. During this period, she served as LDF’s Director of Education and as an Associate Director of Litigation.

Boddie received her J.D. cum laude from Harvard Law School and her B.A. cum laude from Yale.  She also holds a master’s degree in public policy from the John F. Kennedy School of Government at Harvard.  Following a clerkship for Judge Robert L. Carter in the Southern District of New York, Boddie litigated at Fried, Frank, Harris, Shriver & Jacobson in its New York office as the first recipient of the Fried, Frank/LDF fellowship. Boddie has also taught at New York Law School and at Fordham Law School, as a visiting assistant professor. In 2012, the Law and Society Association awarded her the John Hope Franklin Prize for her article, “Racial Territoriality,” which appeared in the UCLA Law Review.  She has also published in the Vanderbilt Law Review, the North Carolina Law Review, the University of Pennsylvania Journal of Constitutional Law, the Harvard Law Review Forum, the UCLA Law Review Discourse, and the Iowa Law Review Bulletin.  Her commentary has appeared in the New York Times, SCOTUSblog, Slate, Huffington Post, and the Chronicle of Higher Education.   She is a frequent public speaker and has appeared on MSNBC, NBC Nightly News, Democracy Now, and National Public Radio, among other television and radio programs.

Boddie is the founder and executive director of The Inclusion Project (TIP) at Rutgers Law School, which seeks to advance racial inclusion and equity in public education, and is also a founding trustee of the New Jersey Coalition for Diverse and Inclusive Schools.  Her other areas of service include her membership on the national board of the American Constitution Society (Executive and Finance Committees) and on the board of the New Jersey Institute for Social Justice (Governance and Strategic Directions Committees); her participation on the Rutgers-Newark Chancellor's Commission on Diversity and Transformation and on the steering committee of the National Coalition on School Diversity.  She also coordinated the Civil Rights & Racial Justice Policy Working Group for Hillary Clinton's 2016 presidential campaign.  In previous years, she served on the boards of the North Star Fund, the Passaic County Legal Aid Society, and Planned Parenthood of Metropolitan New Jersey, on the Association of the Bar of the City of New York’s Labor & Employment Law Committee, and on a blue ribbon task force convened by the Montclair, New Jersey school superintendent to promote integration in the local public schools. 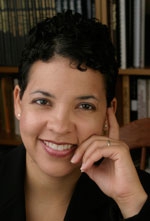 On Executive Power, Bigotry, and Borders

Some of the worst constitutional decisions in U.S. history read like a sleight of hand. So it is with the travel ban decision.