Jessica Clarke’s research focuses on American equality law. She studies constitutional and statutory guarantees of non-discrimination based on traits such as race, sex, sexual orientation, gender identity, religion and disability. Her work has been selected for the Harvard-Stanford-Yale Junior Faculty Forum and has received the Dukeminier Award for the best legal scholarship on sexual orientation and gender identity. After graduating from Yale Law School, Professor Clarke clerked for Judges Shira Scheindlin of the U.S. District Court for the Southern District of New York and Rosemary Pooler of the U.S. Court of Appeals for the Second Circuit. She also worked as an associate in the New York office of Covington & Burling, and spent two years teaching at Columbia Law School as an associate-in-law. From 2011 to 2018, Professor Clarke was an associate professor at the University of Minnesota Law School. In the fall of 2016, she was the Walter V. Schaefer Visiting Professor at the University of Chicago Law School. She teaches Civil Procedure and Constitutional Law. 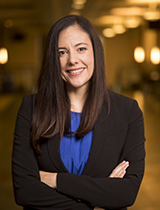 The DACA Decision is Trouble for Discrimination Law

The Dreamers’ victory has been celebrated as a sign that the Court is above partisanship and willing to serve as a check on executive branch abuses. But the price of that victory was a defeat for the Constitution’s guarantee of equal protection.

Despite legal efforts to eliminate it, pregnancy discrimination remains rampant. Responses based in liberty, temporary disability, and sex equality arguments have met limited success in courts.