Ingrid Wuerth is a leading scholar of foreign affairs and public international law. She has written extensively on these topics, including articles published in the Harvard, Chicago, Michigan, Northwestern, and Texas law reviews; the Harvard, Melbourne, Michigan, Vanderbilt and Virginia journals of international law; and the American Journal of International Law. She is currently writing about the relationship between human rights and international law as whole, and about state-owned corporations. Professor Wuerth joined Vanderbilt’s law faculty in 2007 and was appointed director of the International Legal Studies Program in 2009. She was named to the newly endowed Helen Strong Curry Chair in International Law in fall 2015. Professor Wuerth sits on the board of editors of the American Journal of International Lawand is a member of the American Law Institute and the State Department’s Advisory Committee on Public International Law. She was selected in 2012 as a Reporter for the Restatement (Fourth) of the Foreign Relations Law of the United States. She has received numerous honors and fellowships, including the Morehead Scholarship at the University of North Carolina at Chapel Hill, a Fulbright Senior Scholar award, the German Chancellor's Fellowship, election to the German Society of International Law, election to the Order of the Coif and several teaching awards. 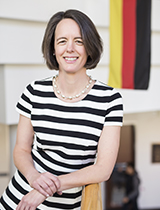 The Perils of National Security Exceptionalism

Whatever side the Court takes in the travel ban litigation, it should renounce national security exceptionalism