Julian Nyarko, Eric Talley, and I have just posted a new paper that uses computational methods to investigate the ideological and partisan structure of constitutional discourse on the floor of Congress (and secondarily in newspaper editorials). The headline finding is that constitutional discourse has grown much more polarized over the past four decades. In fact, it has polarized at least as rapidly as nonconstitutional discourse. How can computational methods show this? Relative to the early and mid-twentieth century, it has become substantially easier for an algorithmic classifier to predict, based solely on the semantic content of a constitutional utterance, whether a Republican/conservative or a Democrat/liberal is speaking.

There are a number of other intriguing findings in the paper, which we hope will open up a new set of research agendas for constitutional scholarship. Here, I will mention just one.

Although the paper focuses on aggregate trends in “constitutional polarization,” we consider in Part V whether some especially salient terms may be doing outsized work in differentiating the parties’ contemporary constitutional rhetorics. The figures below display word clouds associated with the utilization of terms in the broadest constitutional dictionary that we created (containing terms from the text of the Constitution as well as important constitutional concepts that are at least several decades old) for two eras: 1959 to 1976 and 1999 to 2016. The earlier era predates the recent surge in polarization of constitutional discourse; the later era captures the surge at its apex.

Figure A shows the fifty most distinctive terms regardless of party in congressional floor remarks from each era, with size scaled to its distinctiveness. “Distinctiveness” refers to the difference in the relative frequency with which a term is used across the two major parties. For instance, if Republicans use a term 10 times for every 10,000 words they speak, whereas Democrats use it 8 times, then the distinctiveness is (10/10,000) – (8/10,000) = 0.0002. In other words, these are the fifty constitutionally freighted terms that are most strongly “owned” by one particular party during the years in question.

Figure B replicates the analysis for the Obama presidency specifically, the last full presidency for which we have data. All terms in all word clouds are color-coded based on which party uses the term most frequently. 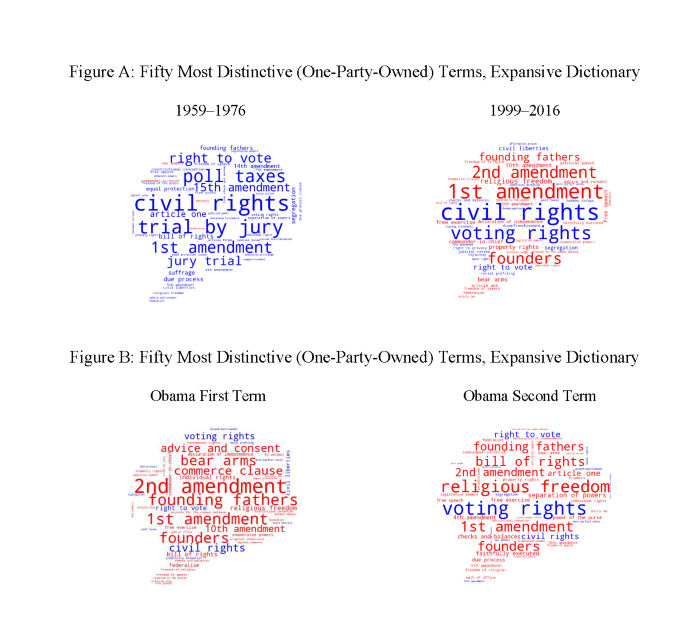 These results, I submit, are stunning. In the 1959–1976 period, Figure A shows, congressional Democrats had a far more distinctive and robust constitutional vocabulary than Republicans did. In the 1999–2016 period, the opposite was true—with the important exceptions that the terms “civil rights” and “voting rights” remained squarely in the Democratic fold.

The Real Problem with Seila

U.C. Hastings College of the Law