The Definition of "Emolument" in English Language and Legal Dictionaries, 1523-1806

I have posted a new paper to SSRN on the historical meaning of "emolument."  It expands on some remarks I gave at a conference on Historical Semantics and Legal Interpretation at the University of Chicago, organized by Alison LaCroix and Jason Merchant.  The abstract of the paper is given below, followed by several tables and figures that summarize the paper’s main findings.  Scroll down to see for yourself why the Trump Justice Department’s narrow definition of “emolument” in CREW v. Trump cannot withstand scrutiny.

In its motion to dismiss in CREW et al. v. Trump, the Department of Justice (DOJ) defines the word “emolument” as “profit arising from office or employ.” DOJ claims that this “original understanding” of “emolument” is both grounded in “contemporaneous dictionary definitions” and justifies an “office-and-employment-specific construction” of that term. On this basis, it argues that the Emoluments Clauses of the Constitution “do not prohibit any company in which the President has any financial interest from doing business with any foreign, federal, or state instrumentality.”

Unfortunately, DOJ’s historical definition of “emolument” is inaccurate, unrepresentative, and misleading. Particularly because the government may seek to utilize its flawed definition in subsequent court filings, this Article seeks to correct the historical record. It does so based on a comprehensive study of how “emolument” is defined in English language dictionaries published from 1604 to 1806, as well as in common law dictionaries published between 1523 and 1792.

Among other things, the Article demonstrates that every English dictionary definition of “emolument” from 1604 to 1806 relies on one or more of the elements of the broad definition DOJ rejects in its brief: “profit,” “advantage,” “gain,” or “benefit.” Furthermore, over 92% of these dictionaries define “emolument” exclusively in these terms, with no reference to “office” or “employment.” By contrast, DOJ’s preferred definition — “profit arising from office or employ” — appears in less than 8% of these dictionaries. Moreover, even these outlier dictionaries always include “gain, or advantage” in their definitions, a fact obscured by DOJ’s selective quotation of only one part of its favored definition from Barclay (1774). The impression DOJ creates in its brief by contrasting four historical definitions of “emolument” — two broad and two narrow — is, therefore, highly misleading.

The suggestion that “emolument” was a legal term of art at the founding, with a sharply circumscribed “office-and-employment-specific” meaning, is also inconsistent with the historical record. A vast quantity of evidence already available in the public domain suggests that the founding generation used the word “emolument” in broad variety of contexts, including private commercial transactions. This Article adds to that emerging historical consensus by documenting that none of the most significant common law dictionaries published from 1523 to 1792 even includes “emolument” in its list of defined terms. In fact, this term is mainly used in these legal dictionaries to define other, less familiar words and concepts. These findings reinforce the conclusion that “emolument” was not a term of art at the founding with a highly restricted meaning.

Finally, the Article calls attention to the fact that the government’s dictionary-based argument is flawed in another, more fundamental respect. Little or no evidence indicates that the two historical dictionaries — Barclay (1774) and Trusler (1766) — on which DOJ relies in its brief to defend its “office-and-employment-specific” definition of “emolument” were owned, possessed, or used by the founders, let alone had any impact on them or on the American people who debated and ratified the Constitution. For example, neither of these dictionaries is mentioned in the more than 178,000 searchable documents in the Founders Online database, which makes publicly available the papers of the six most prominent founders. Nor do these volumes appear in other pertinent databases, such as the Journals of the Continental Congress, Letters of Delegates to Congress, Farrand’s Records, Elliot’s Debates, or the Documentary History of the Ratification of the Constitution. By contrast, all of the dictionaries that the founding generation did possess and use regularly — e.g., Johnson, Bailey, Dyche & Pardon, Ash, and Entick — define “emolument” in the broad manner favoring the plaintiffs: “profit,” “gain,” “advantage,” or “benefit.”

To document its primary claims, the Article includes over 100 original images of English language and legal dictionaries from 1523 to 1806, as well as complete transcripts and easy-to-read tables of the definitions contained therein. A second study is currently underway of dictionaries from 1806 to the present, which seeks to determine how and why definitions of “emolument” may have changed over time. Collectively, these inquiries are designed to accomplish more than simply aiding judges and holding lawyers’ feet to the fire in the emoluments cases now pending in three federal courts. They also provide a basis for educating members of Congress, government officials, journalists, and the broader public about the historical meaning of this important yet obscure constitutional term. 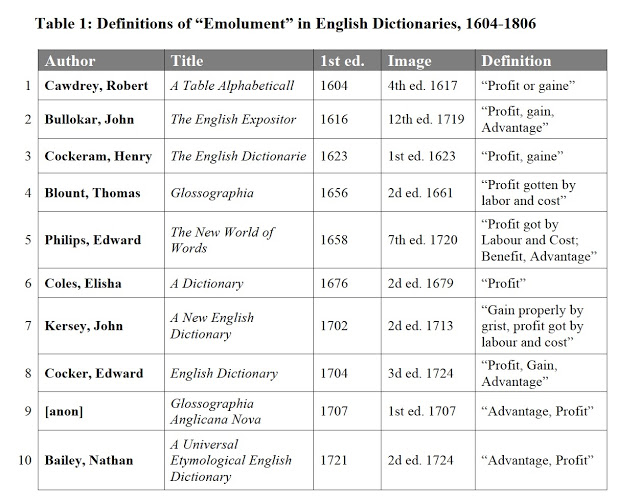 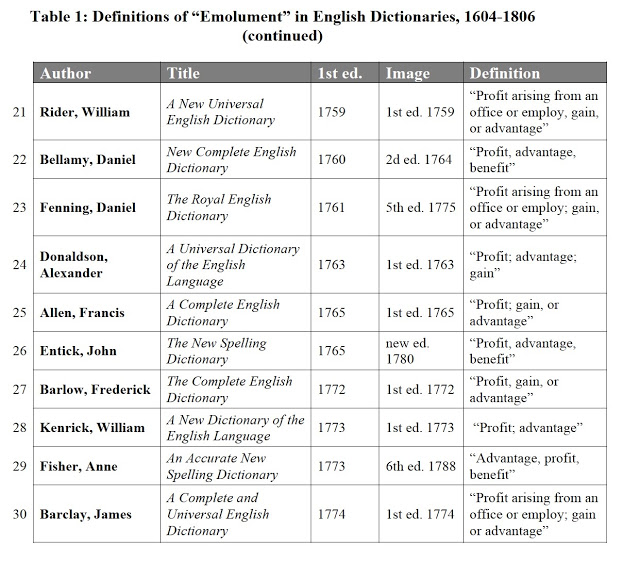 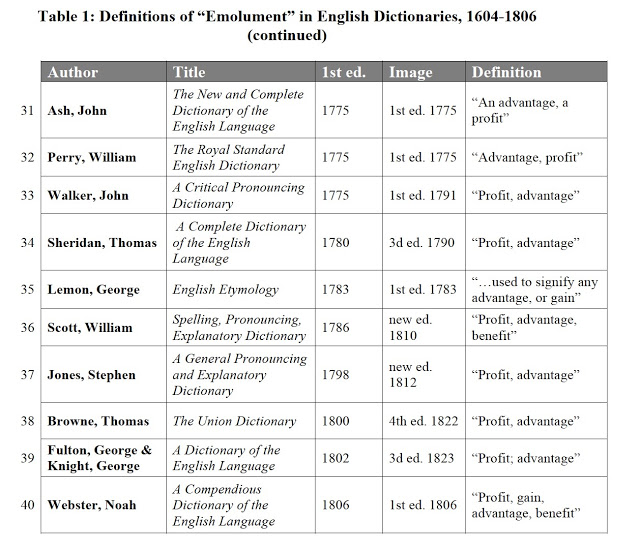 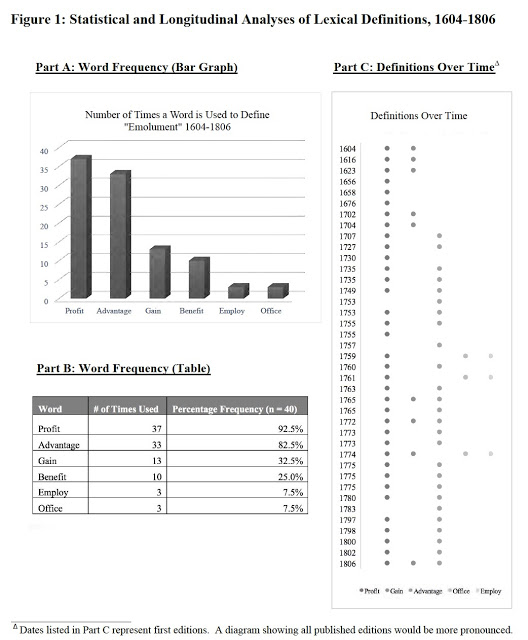 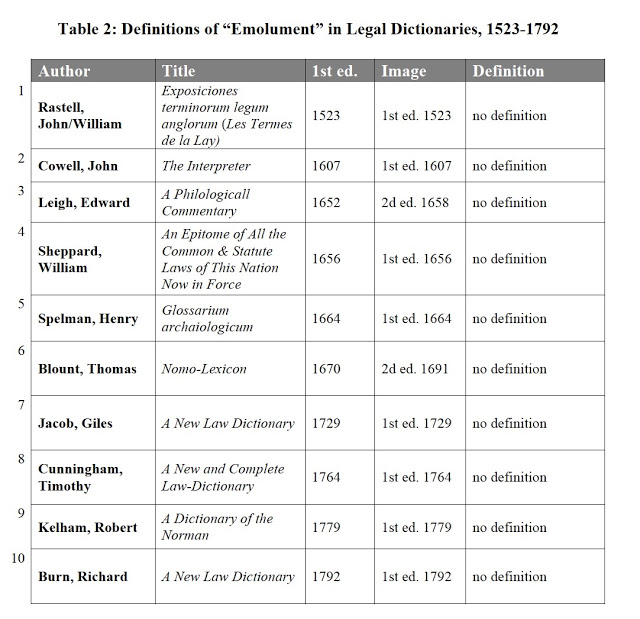