Christian Nationalism and the Bladensburg Cross

Consistent with this conclusion, sociologists have found that Americans who strongly identify with Christian nationalism have more hostile attitudes towards outgroups, religious and otherwise. Thus, in addition to antagonism towards non-Christians, studies show that Christian nationalists exhibit antagonism towards outgroups such as LGBT couples,  racial minorities, and immigrants. That hostility paves the way for hostile public policy, whether allowing foster care agencies to discriminate against non-Christiansor implementing a Muslim ban. Christian nationalism does not simply lead to symbolic exclusion from the community and nation: it may lead to actual, de jure exclusion.

Even if only inadvertently, government-sponsored Christianity, such as the forty-foot Bladensburg cross, can both reflect and contribute to Christian nationalism.  The Bladensburg cross, which stands in the meridian of a busy highway in the suburbs of Washington D.C., was erected as a World War I Veterans Memorial in 1925—an era much less mindful of the rights of minorities. The U.S. Supreme Court recently heard arguments about whether the cross violates the Establishment Clause. 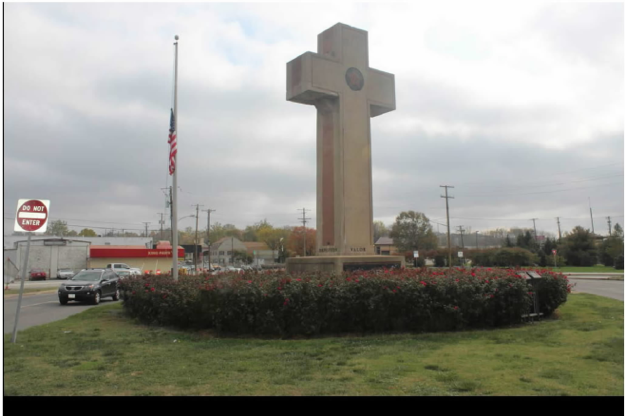 Whatever else it may be, a monumental Latin cross in the middle of the public highway is—at bare minimum—consistent with Christian nationalism and its creed of government identification with and promotion of Christianity.

Nonetheless, the Supreme Court seems poised to let the Bladensburg cross stand. This would be a mistake of constitutional dimension. At the same time the government monument honors Christians who died for the United States, the cross represents a union between Christianity and American citizenship, a union spelled out on its plaque, which announces “our motto, ‘one god, one country, and one flag.’” Even if not specifically motivated by Christian nationalism, the government’s Latin cross monument still advances, or suggests sympathy for, a Christian nationalist ideology (and will be reasonably seen by many as doing so).

Despite the doctrinal confusion surrounding the Establishment Clauseit is generally accepted that the Establishment Clause forbids the government from privileging one religion over others or making its adherents favored members of the polity. In other words, one of the core goals of the Establishment Clause is to stave off developments like Christian nationalism and its hierarchies of citizens. Given that the Bladensburg cross reflects and strengthens this troubling strain in American society, it should be held unconstitutional.

(This Essay provides more detail on Christian nationalism and the Establishment Clause.)