The Overlap Between Impeachment and the 25th Amendment

Cross-posted from Dorf on Law

To make clear that I am about to engage in a purely "academic" exercise, I begin with the obvious political reality: (1) There is virtually no chance that Donald Trump will be removed from the presidency via the 25th Amendment based on his past conduct or his inevitable future conduct of a similar sort; and (2) absent irrefutable evidence of crimes on the order of cannibalistic murder personally committed by Trump, there is also virtually no chance that Trump will be removed from the presidency via impeachment, even assuming a strong midterm wave election in which Democrats take the House and the Senate, because Republicans will still have enough votes in the Senate to block removal.

That is the reality, because it is now clear that there are very few Republicans willing to stand up to Trump when it really matters. I suppose that it is possible that a sufficient drubbing in the midterm elections could change that--which is why I hedged a bit by saying "virtually" twice in the prior paragraph. For practical purposes at least for now, both impeachment and invocation of the 25th Amendment--no matter how justified--are a mirage.

Nonetheless, because I am an academic who values academic exercises, I want to use the current moment--in which our president has issued a self-refuting tweet branding himself a "stable genius" in response to the report in Fire and Fury that various members of his own inner circle regard him as unfit for office--to make some observations about the partial interchangeability of removal by impeachment and removal via the 25th Amendment.

This post is prompted by my initial puzzlement at some of the public debate about impeachment and the 25th Amendment. Here's a stylized typical conversation I've heard lately that is, at least initially, puzzling:

Q: Do you think Trump can be impeached?

A: Can? Sure. Will he be? Not with this Congress or any Congress we're likely to see.

Q: That's too bad. Hey, what about the 25th Amendment? Could Trump be removed that way?

A: Now you're not making any sense. For that to work, Trump would either have to declare himself unable to discharge the duties of his office, which he would never do, or a majority of his cabinet would have to so declare him--and in the extremely unlikely event of the latter happening, Trump would surely contest the finding, which could then only be overridden by a 2/3 vote of both houses of Congress. In other words, as a practical matter, removal via the 25th Amendment is more difficult than removal via impeachment. Impeachment requires only a simple majority vote in the House followed by a 2/3 vote (of those present) in the Senate for removal.

Here's what I find puzzling about both the question and the answer: They tend to treat impeachment and removal for commission of treason, bribery, or other high crimes and misdemeanors as an interchangeable mechanism with removal based on incapacity. But the two mechanisms seem designed for different circumstances.

Hardly. It would be effectively impossible for me to get a job as a violinist for the Philharmonic, because I don't play the violin. I might not get the job as a lawyer, but at least I have relevant training. If we want to know which job is easier for me to get, we need to know something about the substantive qualifications, not just the voting procedure used to judge those substantive qualifications.

So too, one might well think, about impeachment and the 25th Amendment. Whether a president is unable to discharge the duties of his office is a different substantive question from whether he has committed treason, bribery, or other high crimes and misdemeanors that warrant removal. And that is why I found discussions like the hypothetical dialogue I wrote above puzzling. They reduce the differences between removal by impeachment and removal by the 25th Amendment to the respective procedures, without attending to the underlying substantive differences.

Upon reflection, however, I am no longer puzzled. I have come to see the substantive differences between impeachment and the 25th Amendment as much smaller than the differences between playing the violin and working as a lawyer. An analogy to the line between criminal justice and civil commitment illustrates why.

In Kansas v. Hendricks, the Supreme Court upheld a state statutory scheme that allowed a person who had been tried, convicted, and sentenced for committing a crime to be held as a "sexually violent predator" in an ostensibly non-punitive setting even after he had completed his sentence. The Court rejected due process, double jeopardy, and ex post facto objections. Justice Breyer (joined by Justices Stevens, Souter, and in part Ginsburg) dissented. Because of particular features of the Kansas statutory scheme, they thought that the nominally civil confinement that followed the criminal sentence was merely additional criminal punishment in disguise. But notably, even the dissenters agreed with the majority that it would be possible, in principle, for someone who has served a criminal sentence to be subjected to subsequent civil confinement, even if the same underlying conduct that gave rise to the initial criminal conviction and sentence were part of the basis for the civil confinement order.

We sometimes tend to think that antisocial behavior must be either the product of a condition like a mental illness or the result of a free and thus criminally culpable choice. In this picture, punishment for crime and civil confinement are mutually exclusive alternatives. Yet in reality, the Venn diagram of antisocial behavior includes an area of substantial overlap, as in the following: 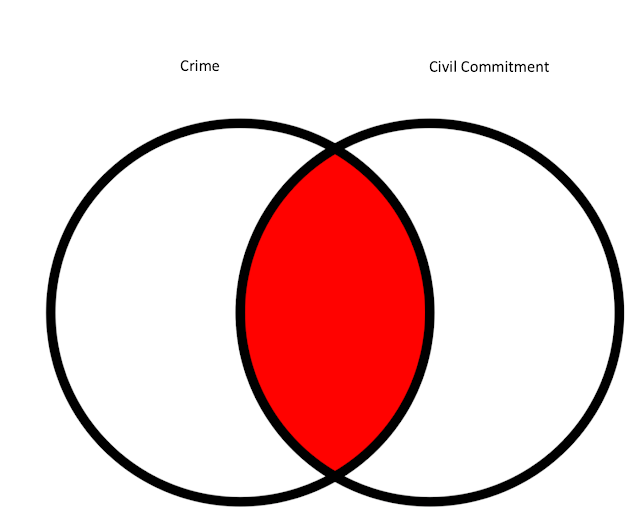 Note that I'm not saying that Kansas v. Hendricks was rightly decided. Arguably, even the dissenters went too far in allowing, if only in principle, a state to commit someone civilly after he has served a criminal sentence for behavior that was also the basis for concluding that he needs to continue to be confined. One might apply a rule under which conduct falling within the red area of overlap can be treated by the state as either criminal or a basis for civil confinement but not both.

My point here is that whichever of those approaches one adopts--the majority in Hendricks, the dissent in Hendricks, or the still-more-civil-libertarian approach in which the state must choose between the two options--there is still an area of overlap. The goals of civil confinement and criminal punishment are not entirely different; both serve a public safety interest. And there is a substantial area of behavioral overlap.

We can say the same thing about the 25th Amendment and impeachment. These are different mechanisms for achieving overlapping goals, and there will be cases in which the underlying conduct could be classified as satisfying both. I take it that is the real reason why people move easily between talking about impeachment and talking about the 25th Amendment, at least with respect to Trump. Each mechanism serves the ultimate goal of ousting a dangerously unfit president whose words and deeds daily manifest his unfitness. And Trump's conduct seems both culpable and the product of some cognitive and/or emotional impairment.

Postscript: Readers who find the foregoing interesting may wish to pre-order the forthcoming terrific book on impeachment by Laurence Tribe and Joshua Matz, To End a Presidency. I read it in draft and found it chock full of interesting analysis and historical discussion.

Versus Trump: Can Trump Steal The Election?

On this week’s Versus Trump, Jason and Charlie discuss whether Trump can really "steal" the election, as some have started to worry about. They discuss Jason's piece here on the topic. Plus, they say goodbye to Justice Ginsburg. Listen now!

Can We — And The Press — Maybe Take A Breath On The Whole Stolen Election Thing?

It seems like a stolen election is all anyone can talk about these days. But it's very unlikely.

Versus Trump: Trump Versus Mail Voting

On this week’s Versus Trump, Jason and Charlie discuss voting by mail in the pandemic. Have courts allowed the rules to be changed, either in responses to suits there should be more voting by mail—or less? Listen now!