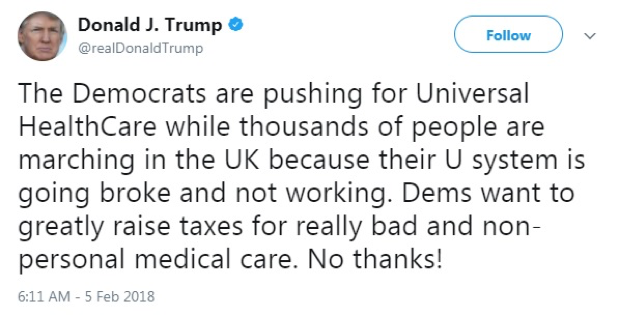 There are at least three important observations about this tweet. First, it represents a broken promise to the American people. Second, it displays the President’s failure to understand how our health care system works, and how it differs from the health care systems of other countries. Third, this lack of understanding matters for the President’s own policy goals – I’ll illustrate why with just one example, drug pricing.

The first and, perhaps, the simplest observation about the President’s tweet is that it directly contradicts promises he has repeatedly made to the American people. At Axios, Sam Baker helpfully cataloged some of these former promises. Even putting aside Trump’s 2000 position that “[w]e must have universal healthcare,” as a candidate in 2015 he stated clearly that “everybody’s got to be covered … I am going to take care of everybody.” Just before his inauguration last year, he articulated his goal of “insurance for everybody.”

Yet in the last year, President Trump has failed to put forward a plan that would actually accomplish his stated goal. The Republican-sponsored House and Senate plans from 2017 to “repeal and replace” the Affordable Care Act would have led to 26 million more uninsured Americans. Now, the President may be backing away from his own goal of “insurance for everybody.”

But perhaps this is too harsh, and the President is not backing away from his own position – he is merely arguing that raising taxes and adopting a UK-like system is not the way to accomplish that goal. If so, we run into another problem with this tweet: the President’s lack of understanding of health care policy.

The second observation to make about this tweet is that it evinces a lack of understanding of how health care operates, both in this country and abroad. As Kaiser Family Foundation health policy expert Larry Levitt suggested, the President’s tweet conflated a number of separate concepts. Universal health care – in other words, the provision of healthcare coverage for everyone – can be accomplished in many different ways. In the UK, the National Health Service provides care by doctors who are employed by the government, through public hospitals. In the US, our Veterans Affairs system more closely resembles this model.

However, Democrat-sponsored plans to achieve universal health care do not use this model. Senator Bernie Sanders’ “Medicare for All” proposal expands our existing Medicare system, in which the government serves as a single payer, but hospitals and physicians remain private entities. This system more closely resembles Canada’s single-payer system, in which the government reimburses mostly private entities for the care they provide.

In short, universal health care is a goal, not a policy prescription. There are likely as many routes to universal coverage as there are countries achieving the outcome. (I recommend a feature from the New York Times this summer, comparing eight nations including the ones mentioned here.)

Does the President’s lack of appreciation of these distinctions really matter? Perhaps not, if he had a clear outcome in mind and could be supported by expert policy advisors. But his opposition to at least some methods of accomplishing universal coverage will directly prevent him from accomplishing some of his other policy goals: like lowering drug prices.

Other Countries Get Lower Drug Prices.

Both as a candidate and now while in office, the President has spoken repeatedly of his desire to lower prescription drug prices. At times, he has accused drug companies of “getting away with murder.” Last week, while swearing in his new HHS Secretary, he claimed that new Secretary Alex Azar would get drug prices “way down.” And in his State of the Union address this year, he stated that “[o]ne of my greatest priorities is to reduce the price of prescription drugs.” As I have previously noted, however, the White House has yet to take any actions on this front.

For now, what’s most important is the next line of his State of the Union address: “In many other countries, these drugs cost far less than what we pay in the United States.” This is a true statement – and it is directly connected to those countries’ universal health care systems.

Other countries use a range of regulatory tools to obtain better prices for the drugs they buy for their citizens. Countries can use the price of a drug in other countries as a benchmark. Countries can evaluate a drug’s benefits relative to existing products, refusing to pay more for new drugs which are no more effective. Perhaps most importantly, countries can refuse to cover a drug at all if its benefits aren’t worth its cost.

Medicare and Medicaid do not use these tools. Medicare is legally obligated to cover most or all drugs in a particular therapeutic class. Medicaid has some financial protections for the program built in, but is similarly required to cover essentially all FDA-approved drugs. Medicare and Medicaid cannot refuse to cover a drug if it provides little benefit at a sky-high cost. They cannot benchmark its price to those of other drugs, or to its price in other countries.

The President claims to want to lower drug prices, jealously eyeing other countries’ successes on that front. But he explicitly rejects the very tools other countries have used to obtain them. This tweet, like many others, can be shrugged off as another anti-Democrat rant. But it is more properly viewed as an example of how the President’s own policy preferences are inconsistent, in a way that will prevent him from accomplishing his own stated goals.

Even the Supreme Court has been required to take unprecedented steps by closing the building, postponing argument dates, and converting to telephonic hearings. Those impacts should be reflected in all aspects of the Court’s work, including the decisions it renders for the remainder of this term.

Are There Five Textualists on the Supreme Court? If So, They’ll Rule for Transgender Workers.

The Title VII cases before the Court present a fundamental question: are there really five textualists on the Court? We’ll find out soon.