Impeachment as a Constitutional Design Choice

Take Care is pleased to host a symposium on To End A Presidency: The Power of Impeachment—a new book by Larry Tribe & Joshua Matz.

This comment draws on our forthcoming book on democratic failure, How to Save a Constitutional Democracy (University of Chicago Press, 2018)

As Laurence Tribe and Joshua Matz eloquently recount in To End a Presidency, the U.S. Constitution almost did not countenance impeachment. The palpable difficulties of designing such a removal mechanism, they document, “led some Framers to give up on the very idea of presidential impeachment.” (p.114).  Even more tellingly, they explain that the removal device set forth by Article I, §§ 2 & 3, and Article II, § 4, may today operate in a very different way from the manner in which it was expected to work. Perceptive commentators closer than us to the Framers, such as Joseph Story and Alexis de Toqueville, highlighted the “limited consequences of an impeachment”; they thence reasoned to the prediction that impeachment would become a “‘regular influence … at all times available’ [to] deter official misconduct.” (pp.12-13).  Rather than cataclysm, impeachment was expected to be a commonplace.

Of course, it was not to be. Today, this disjuncture is telling because it casts light on the causes of our present conjuncture.  For it is plain that the version of impeachment envisaged by Story and de Toqueville would not generate the central normative difficult with which Tribe and Matz struggle—i.e., the difficulty of choosing between the risk of political “havoc” associated with an uncommon impeachment and the risk of leaving in place “a truly determined tyrant” or some other similarly morally despicable leader (p.xx). Therefore, it is not the document’s textual specification of impeachment that creates the central normative problem framed by To End a Presidency.  Rather, it is what scholars such as Keith Whittington would call the constitutional construction that generates the perverse situation in which the removal of a sitting president is very unlikely to occur under conditions in which it is objectively warranted. The crisis, in other words, is idiopathic and not originalist in character.

This gap between text and observed practice is hardly confined to the impeachment-related clauses of the Constitution. In this, as in many other matters, constitutional text is, if not “irrelevant,” at least a predictably inadequate determinant of current practice. In the impeachment context, we think it is plausible to suggest that the emergence of a national two-party system in the 1790s rendered the Story/Toqueville version of impeachment incompatible with the felt compulsions of legislators. Into the nineteenth century, Stephen Griffin has usefully explored subsequent steps in impeachment’s reconstruction under unanticipated partisan conditions. The resulting gap is large. A telling sign of its extent is to be found in To End a Presidency’s silences: Tribe and Matz develop a purportedly comprehensive account of impeachment—and yet, consistent with their title, they pretty much ignore cases which constitute the overwhelming numerical majority of its practical applications. Article II, § 4, we should  recall, speaks of impeachments of “[t]he President, Vice President, and all Civil Officers of the United States.” Hence—aside from a brief note on Supreme Court Justices—Tribe and Matz write as if the last ten words of that phrase did not exist. They do consider, for example, how their purported criterion for impeachment would fit (or rather manifestly fail to fit) nonpresidential cases covered by the same textual dispensation. Such is the power, we might conclude, of historical gloss.

Might the Framers have done better, such that their initial solution would have been stickier? To Tribe and Matz’s great credit, To End a Presidency dodges the snare of parochialism, and recognizes the possibility of a better constitutional design (p.15) and in particular the virtue of comparative analysis (see, e.g., p.26). We think this is an important insight. The question of whether we could do better is very difficult to answer. But thinking carefully about how head-of-state malfeasance has been countered in other democratic constitutions may be one way of getting some sense of whether alternative approaches are even available. A comparative view might also afford some perspective on an alternative “construction” or “gloss” on the impeachment clauses that avoids the twin perils of “havoc” and “tyranny,” the Scylla and Charybdis of Tribe and Matz’s telling.  Perhaps that won’t be of immediate help today. But maybe, just maybe, there will be a future in which it will be valuable.[1]

We think there are three high-level points that emerge from even a brief dip into comparative perspectives on presidential removal.

First, Tribe and Matz plangently note that the task of writing a new democratic constitution is “mind-blowingly hard” (p.113). Each of us has been involved in multiple such efforts, and we agree. Even the task of avoiding catastrophic design errors is epistemically and politically demanding—and constitutional designers often fail in this regard. One of us has argued elsewhere that a rational constitutional designer might conclude that it is therefore not worth sweating the details of an executive removal device, such as impeachment. That is, Framers who would have left this question in the constitutional design template blank may not be as foolhardy as they might first seem.

Second, the problem of head-of-state removal is acute in presidential and semi-presidential systems. It does not arise in the same fashion in parliamentary systems that employ a vote-of-no-confidence measure to remove heads of government (cf. p.18). The difficulty of head-of-state removal, moreover, is not limited to the design of an impeachment-like mechanism. As one of us explored in prior work, a presidential or semi-presidential system must also grapple with the question of whether to impose term limits to mitigate the risk of partisan entrenchment. As recent experiences in Honduras, Niger, and Burundi vividly show, a polity must then struggle with the attendant problem of how to enforce such a constraint against a recalcitrant leader.

Given these plural risks, it is hardly surprising that constitutional designers have proved increasingly unwilling to adopt a presidential form of government. The following graphic plots the numbers of parliamentary, semi-presidential, and presidential systems over time to underscore this point: 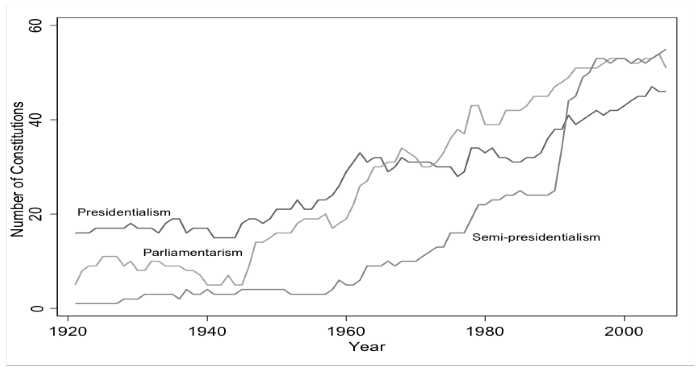 As this figure shows, an increasingly common response to the problem of head-of-state criminality is to refuse to invest the head of state with substantial power. The rise of semi-presidentialism, in which there is a directly elected fixed-term president, along with a prime minister and a cabinet responsible to the legislature, is not inconsistent with this point since many of those presidents are fairly weak. Nevertheless, recent events in Italy are a reminder that even a limited presidential role in a parliamentary system can be consequential enough to spur what Tribe and Matz call “impeachment talk.”

A third point is best characterized as a spur to further research. Consider the graphic below, which presents the grounds for impeachment employed in all presidential and semi-presidential systems as of 2015 (omitting monarchies, and the small number of constitutions that do not speak to the question). 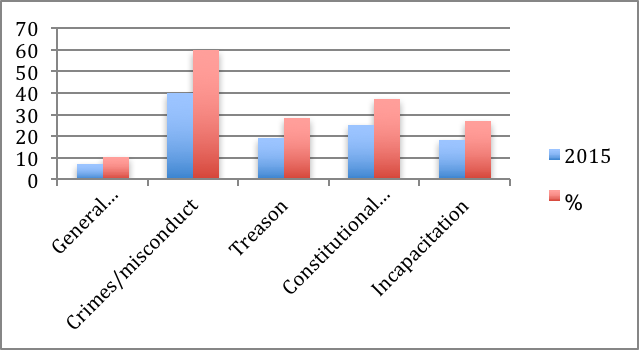 In the aggregate, this data suggests, democratic systems have not converged on a singular approach to the criteria for impeachment. To the contrary, they are strikingly diverse in the substance of their impeachment law.  But there is again a notable divergence from the U.S. approach. Contrary to the Tribe and Matz’s reading of the U.S. Constitution, criminal offenses and treason, rather than the “broad and adaptable” concept of “offenses against the state” (pp.40, 45), seem to be core criteria for impeachment globally. (Recall that Tribe and Matz see criminality as overlapping with the category of impeachable offenses,  but not exhausting it) (p.51).  It is also intriguing that that presidential violations of the constitution—which, as Tribe and Matz note, are routinely touted in the modern U.S. context—provide a third important ground.  The class of constitutional violations is not the same as the class of cases in which the use of executive power “posed a mortal threat to the nation.”  (p.55).  Once more, that is, comparative experience seems to suggest that the U.S. constitutional system has not necessarily converged on an obvious, or consensus, solution to the problem of head-of-state illegality. Exceptionalism here, if not elsewhere, seems the order of the day.

This is not the only way in which impeachment processes can vary.  Beyond the use of different predicate criteria for impeachment, different systems involve different actors in the process. In South Korea, for instance, two of the last three presidents have been impeached by the National Assembly, but only one of the two was deemed by the Constitutional Court to have committed sufficiently grave violations to be removed from office. In other constitutional systems, such as those of Taiwan or Austria, the president can be removed through a process involving a public recall vote, provided that a sufficient majority of the legislature agrees.  The Framers’ uncertainty about the appropriate institutional players in an impeachment drama—again well documented by Tribe and Matz—is thus reflected in the larger comparative context of institutional heterogeneity.

We suspect there is far more to learn about impeachment by thinking comparatively. Whether it casts light on the tension between different risks that at the heart of Tribe and Matz’s account remains to be seen. But it cannot be ruled out. To End a Presidency—focused as it is on the U.S. experience—only scratches the surface.  And we are grateful to Tribe and Matz for reminding us that there is far more work remains to be done toward better understanding impeachment in comparative perspective.

[1] On this point, our colleague Richard McAdams reminds us of Kafka’s pertinent aphorism: "There is an infinite amount of hope in the universe ... but not for us."

Versus Trump: Can Trump Steal The Election?

On this week’s Versus Trump, Jason and Charlie discuss whether Trump can really "steal" the election, as some have started to worry about. They discuss Jason's piece here on the topic. Plus, they say goodbye to Justice Ginsburg. Listen now!

Can We — And The Press — Maybe Take A Breath On The Whole Stolen Election Thing?

It seems like a stolen election is all anyone can talk about these days. But it's very unlikely.

Versus Trump: Trump Versus Mail Voting

On this week’s Versus Trump, Jason and Charlie discuss voting by mail in the pandemic. Have courts allowed the rules to be changed, either in responses to suits there should be more voting by mail—or less? Listen now!